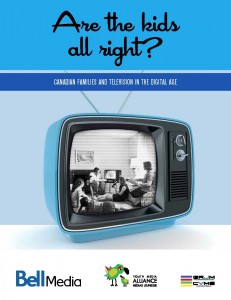 The study Are the kids all right? is an initiative of the Youth Media Alliance (YMA) and is supported and funded by Bell Media. The translation of the study was funded by the Canada Media Fund, which also contributed to its publication. For more than thirty years, YMA has closely monitored the quality of Canadian children’s television and other screen-based content for children.

The second phase of the study consisted of a thorough examination of the appropriation of media by families and children: in addition to the role, perception, and influence of TV, the study examined how children make use of new screen-based media such as computers, video game consoles, and smartphones. Based on this approach, the researchers interviewed Canadian families in their everyday environment (their homes) in five Canadian cities: St. John’s, Montréal, Toronto, Calgary, and Vancouver. The researchers also used the method of focus groups, composed respectively of children, fathers, mothers, and young adolescents in each city